Seiska Magazine: Black Jack and drinks with a blanket around his shoulder

It was reported that Kimi Räikkönen arrived to Finland at the end of last week, since he got some extra time off due to the testing being cancelled because of weather conditions. However Seiska knew that the Iceman had spent the Labor Day in his old neighborhood in Espoo last Tuesday 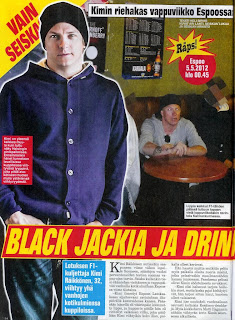 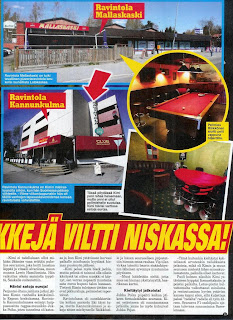 - Kimi appeared to a restaurant in Latokaski in the afternoon with his buddies. He was wearing a cap that was turned the other way and he had some white blanket over his hoodie, and he also wore that white blanket all night, people who were present told.

He challenged other young men who were in the restaurant to come and play with him, and they playedeagerly with the F1-star. With Kimi's suggestion they placed the cigarettes on the table as a bet.

- Kimi would had wanted to buy them beer but because the boys refused he then bought them soda drinks, people told.

Kimi himself was having yellow Summery-drinks. Icehockey-player Matti Hagman was also enjoying some time in Kimi's entourage.

- Kimi is certainly no Iceman, instead he is a very talkative companion who told funny stories and jokes all the time, about Lewis Hamilton for example. He seems like a really terrific guy, they praised to Seiska.

On Friday night the partying continued in Kimi's neighborhood again. The popular Reggae-artist Jukka Poika performed in restaurant Kannunkulma, hence the atmosphere was already in the roof when Kimi and his friend cruised with a mini-van to the place a little after midnight.

- Kimi also played black jack but either he didn't have any clue of the game or then he just wasn't lucky, a few hundred euros went that fast to the House. Of course when knowing Kimi's incomes they are peanuts, the players reported.

The restaurant was almost full due to the favorite artist, but they arranged for Räikkönen and his entourage a bit of their own peace. They put up a VIP-space for them in a corner near the income by putting up a few tables.

- The others were evicted from the VIP-space so that the man got a little privacy, people from the bar told.

Jukka Poika spent a moment with Kimi after the gig. Kimi and his friends were going to an after-party to which they also invited Jukka Poika.

- However he refused politely from the most likely speedy after-party, which Kimi and the rest of the entourage thought was unheard of, people from the restaurant informed.

Around 2.30 in the morning Kimi and his friends jumped in a big taxi and left the place. Kimi's hilarious mini-vacation and relaxing with good friends ended yesterday, because the driver had to return from the 'track' to the track, in other words his work.

"In this table Kimi burned money but he had no luck. Kimi lost hundreds of euros in fifteen minutes."

"Kimi is usually all but a familiar sight in Helsinki's jetset-restaurants. He is mostly known as a guy who enjoys it in ordinary pubs and who very generously takes care of his friends' comfort."